The Wandboard is an inexpensive miniature PC with a Freescale i.MX6 processor and a starting price of $69. It’s sold as a developer board, which means that you basically get the system board but no case or storage. You’ll need to add your own SD card.

The developers introduced the device earlier this month and plan to ship the first Wandboard units in November. This week they also released the first actual photos of the little computer. 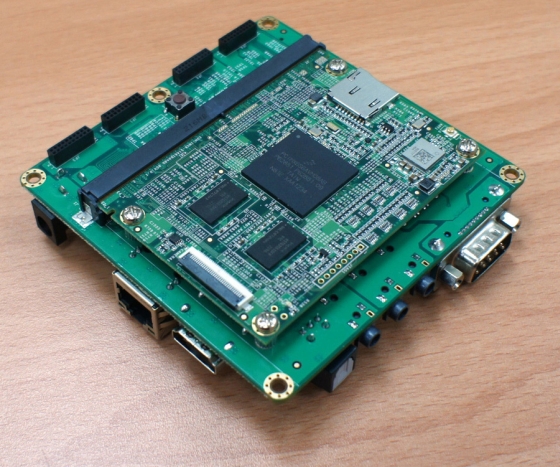 Around the edges of the board you’ll find a number of connectors including Ethernet, HDMI, USB, microSD, audio jacks, and a serial port. There are also GPIO pins for additional hardware.

The Wandboard has a modular design, which means that you can upgrade the system by replacing the card with the RAM, processor, and other components.

At launch there will be two models. The $69 Wandboard Solo has a Freescale i.MX6 ARM Cortex-A9 single core processor, 512MB of RAM, and no wireless capabilities.

For $89 you can get the Wandboard DualLite, which has an i.MX6 dual core CPU, 1GB of RAM, WiFi and Bluetooth.

Both modules also include a second microSD card slot, so you can actually install an operating system on one storage card and use the remaining slot for removable storage.

2 replies on “This is what the $69 Wandboard Freescale i.MX6 dev board looks like”