Mozilla has been working on a new Windows 8 style user interface for the Firefox web browser for a few months. Now a preview version is available for community testing.

You’ll still be able to run the full desktop-style version of Firefox on a Windows 8 computer, and navigate with a keyboard and mouse. But the Firefox Metro app is designed as a full-screen app for the new touchscreen-friendly Windows 8 Metro-style user interface. 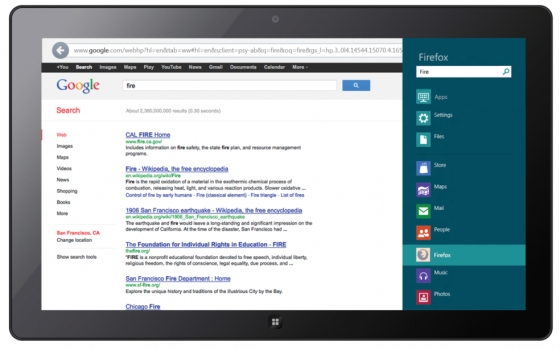 Sure, Microsoft doesn’t call the Windows 8 UI “Metro” anymore, but, that hasn’t stopped Mozilla from referring to the new browser as Firefox Metro… because “Windows 8 style” is just confusing (since you run full-screen, Metro apps or traditional desktop apps in Windows 8).

Anyway, the new Firefox Metro user interface borrows some elements from the Firefox web browser for Android phones and tablets, including the tab bar and graphics.

It also borrows from the Windows 8 user interface with tile-style bookmarks and search history. The tab menu also looks a lot like the Internet Explorer tab bar which appears at the top of the screen when you swipe down.

If you’re running Windows 8 RTM, you can download the latest nightly build and try it yourself. Firefox for Windows 8 Metro is still a work in progress. As of October 4th, Adobe Flash and other add-ons don’t work yet. And panning and zooming aren’t implemented yet, while scrolling with a mouse wheel is currently broken.

Firefox for Windows 8 will only run on computers with x86 processors. There are no plans for a Windows RT version for devices with ARM chips, due to Microsoft’s requirements and restrictions for third party Windows RT apps.

You can read more about Firefox for Windows 8 at the Mozilla Blog and at Brian Bondy’s blog.