Sony has unveiled launch details for the company’s Windows 8 product line. The Sony Vaio Duo 11 sliding tablet will be available later this month for $1100, while the Tap20 desktop that turns into a 20 inch tablet will run $880.

The Duo 11 slider features an 11.6 inch, 1080p touchscreen display with support for pen input, 4GB of memory, a 128GB solid state disk, and an Intel Ivy Bridge processor with a choice of i3 through i7 chips.

While this computer looks like an all-in-one desktop with a touchscreen display (which it is), it also has a removable battery which lets you move the computer around the house, use it like a tablet, or even lay it flat on a table or floor to play digital boardgames. 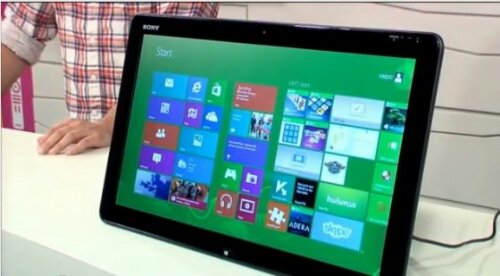 Sony is also updating its notebook and ultrabook lines with new Windows 8 models, including 13 inch and 14 inch laptops with touchscreen displays. The new Sony Vaio T13 touchscreen ultrabook will have a starting price of $670.