Just days after Google introduced the new Samsung Chromebook, a Google developer has figured out how to run Ubuntu on the $249 laptop.

Samsung’s latest Chromebook is the first model to feature an ARM-based processor. It’s also one of the first devices to hit the market with a chip based on the new ARM Cortex-A15 design. But since Ubuntu (and many other Linux-based operating systems) already support ARM Architecture, it’s not that difficult to get the Chromebook to run a different operating system. 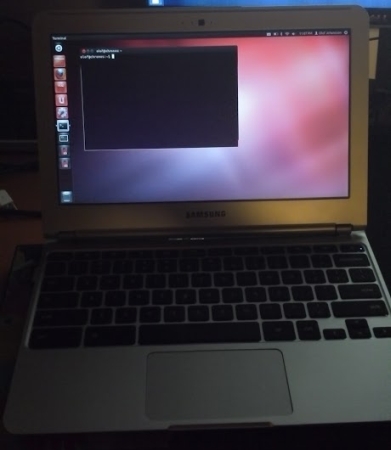 At this point, the Samsung Chromebook doesn’t run Ubuntu quite as well. Developer Olof Johansson figured out how to get Ubuntu up and running on the ARM-based Chromebook, but he reports that the trackpad isn’t working perfectly yet.

But the good news is that you don’t need to replace Chrome OS to run Ubuntu. You can write an Ubuntu image to an SD card and boot the Chromebook from a removable storage card.

The Samsung Chromebook 11.6 inch, 1366 x 768 pixel display, 2GB of RAM, 16GB of storage, and a Samsung Exynos 5 ARM Cortex-A15 processor. When it’s running Chrome OS, it boots in about 10 seconds, resumes from sleep instantly, and gets about 6.5 hours of battery life when running Chrome OS.

I wouldn’t expect Ubuntu to perform quite as well. One of the benefits of Chrome OS is that it’s an operating system designed around a single app: a web browser. So the OS doesn’t need to load as much software upon boot as Ubuntu, Windows, or other operating systems.