Now that the Microsoft Surface RT tablet is now available for $499 and up, it was only a matter of time before someone ripped it apart to see what it looks like on the inside. The folks at iFixit did just that… and discovered that while the tablet’s not too hard to rip apart, putting it back together might be a bit tricky in some situations.

They gave the Surface RT a repairability score of 4 out of 10. 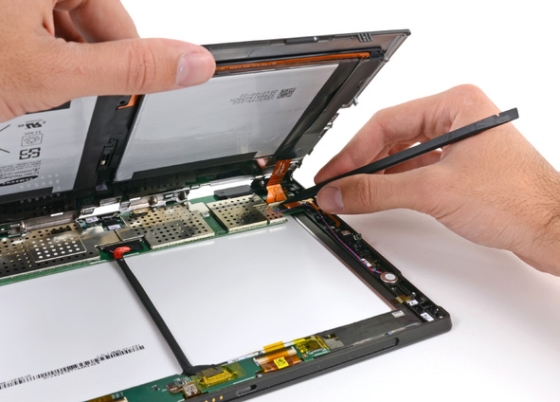 The good news is that some bits including the speakers, microphones, and webcams should be replacable. Even the battery can be pried off and swapped out for a new one.

The bad news is that you’ll have to dissect the tablet to get at any of those components, and that means tearing a seal so Microsoft will know if you’ve tampered with the device. It’s not clear what effect that would have on your warranty, but if you still have a warranty it might be a good idea to send a broken tablet back to Microsoft for repair rather than trying to fix it yourself.

Replacing the screen or keyboard could also be difficult and/or expensive because of the way the tablet is designed.

Another interesting discovery was that in addition to the stereo speakers, there appears to be another small speaker in the case. This may be responsible for the “click” sound that the tablet makes when you attach one of Microsoft’s optional keyboard covers.