If you’ve got a smartphone, odds are you’ve always got a camera on you which you can use to document your experiences. But how often to you actually pull it out to take photos?

A new project called Memoto wants to bring a tiny, wearable camera to market that automatically documents your experiences by snapping two photos a minute… all the time. 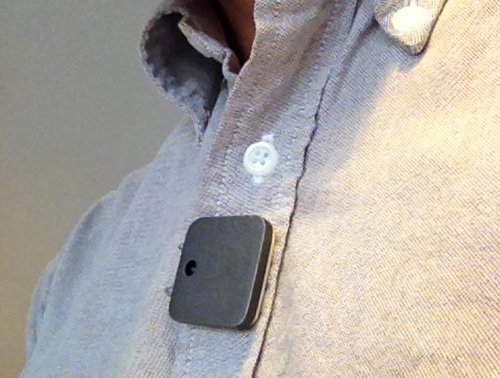 Here’s the pitch: You wear the little camera around your neck in a chain, or clip it to your shirt, and it will snap photos every 30 seconds for up to 4,000 pictures per day. The battery lasts for up to 2 days. When you plug the Memoto into your computer to recharge, the photos will automatically be uploaded to the company’s cloud storage service.

Since Memoto can shoot up to 1.5TB worth of photos per year, that keeps you from having to use your own disk space to store all of those pictures.

It also means you can use the Memoto smartphone apps to quickly find photos and view “moments” of your life. Overall, the Memoto isn’t so much a camera as a lifelogger.

There’s also an accelerometer to help make sure your photos are right-side up no matter how you’re wearing the camera.

Memoto isn’t a real device yet. The developers have taken to Kickstarter to raise money to transform it from a prototype to a real product. At this point if you pledge $249 or more you’ll be put in line for one of the first devices to ship in March, 2013 — if the Memoto actually launches as scheduled.

That pledge also gets you a 1 year subscription to Memoto’s online storage service.

As currently envisioned, the Memoto isn’t all that useful unless you have that subscription, because there’s no option to save your photos to a local hard drive. But after blowing through the original $50,000 goal on Kickstarter, the team has added a few “stretch goals.”

If at least $350,000 is raised, a new feature will be added that gives you the option of saving photos to your computer when you connect the Memoto to charge it. Other new features would include an option to adjust how frequently the device snaps pictures and a way to snap a picture manually by double-tapping the device to use the accelerometer as a trigger.

Well over a thousand people have backed the project on Kickstarter, and more than $265 thousand dollars have been raised so far — with more than a month left to go in the fundraising round. So clearly the idea has struck a chord with some folks.

On the other hand… I’m not sure that a lifelogging camera that takes pictures automatically is going to be a replacement for a decent point-and-shoot camera, or even a smartphone camera anytime soon. There’s no way to look through the camera lens to even see what the Memoto is taking a picture of, so you’ll probably end up with a lot of blurry photos with a lot of movement and images of the back of people’s heads.