Netflix isn’t the only subscription video service with a new Windows 8 app to show off. Rival Hulu Plus has released a Windows 8 app that lets subscribers stream movies, TV shows, web series, and other videos using a native Windows app — no web browser required. 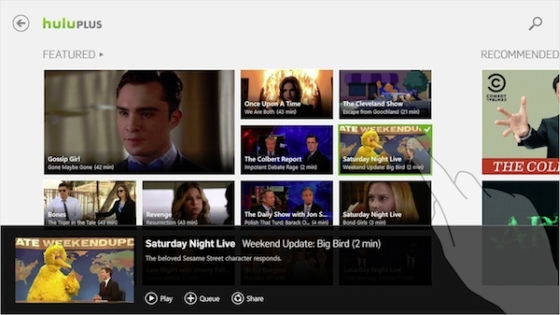 Like other apps designed to use Microsoft’s new “Modern” UI, the Hulu Plus app has a full-screen user interface, touchscreen-friendly controls, and a heavy reliance on “tiles” to cram as a lot of pictures/icons in your face without using much text.

You can also “pin” favorite shows to the Windows Start Screen so that you can jump right to them without first opening the Hulu Plus app.

Hulu Plus also works in Snap view, which means that you can snap a video window to the side of the screen and launch a second app while your video is still playing.

The Hulu app will come preloaded on some Acer and Sony computers. If it’s not already installed on your computer, you can grab it from the Windows Store.

You’ll need to pay $7.99 per month to use the app. Or you could just fire up a web browser on your Windows 8 computer and stream videos from Hulu for free. But subscribers don’t just get access to mobile apps (and the Windows 8 app… which isn’t strictly just for mobile devices). Hulu Plus also offers content that’s not available to non-subscribers, including older episodes of many TV shows.