HP will launch a Windows 8 tablet aimed at enterprise customers in early 2013. It’s called the HP ElitePad 900, and it’s expected to go on sale starting in January. Pricing hasn’t been set yet.

Designed for business customers, the ElitePad 900 is a 10 inch tablet with a capacitive touchscreen for user with your fingers, as well as an active digitizer and optional digital pen for writing or drawing.

The key thing that sets the ElitePad 900 apart from the competition, though, is the use of “smart jackets.” 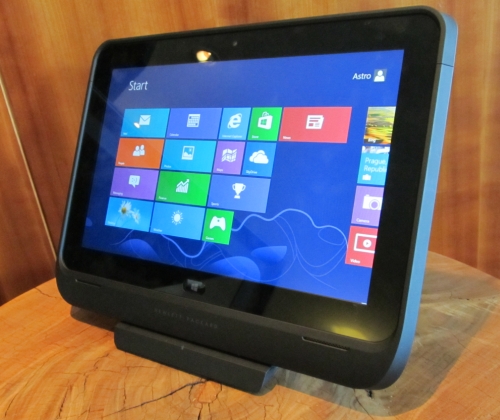 HP’s smart jackets are cases that you can snap onto the tablet to expand its functionality. Like any case, the smart jackets help protect the tablet from scratches, scrapes, and drops.  But they can also increase the number of available ports, extend the device’s battery life, or add a keyboard.

For instance, there’s a smart jacket which 2 full-sized USB ports, a full-sized HDMI port, and a full-sized SDHC card slot to one side of the tablet. The same jacket also has a compartment for an extended battery that lets you boost the ElitePad 900’s battery life by about 80 percent for a total of up to 18 hours of run time.

HP will offer versions of this smart jacket designed for portrait or landscape orientation.

There’s another case that includes a keyboard, letting you use the tablet like a laptop.

HP also offers an optional docking station that can be used to charge the ElitePad 900 or add extra ports. It works whether you’re using the tablet alone, or the tablet and a smart jacket.

As for the tablet itself, it’s a sturdy device featuring an aluminum case and Corning Gorilla Glass screen. It’s been Mil spec tested to withstand drops of up to 36 inches. 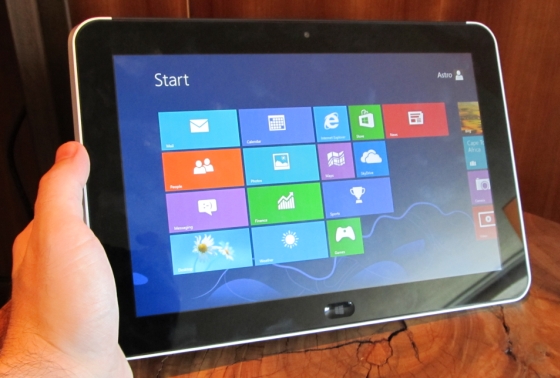 Like the HP Envy x2 consumer tablet, the ElitePad 900 is powered by an Intel Atom Clover Trail processor and runs Windows 8 software.

HP says the decision to go with a 1280 x 800 pixel screen with a 16:10 aspect ratio, though, was made to ensure compatibility with older Windows apps. Since this is a business tablet, it’s likely that some customers will want to run apps that may have been designed for Windows 7, Windows XP, or even older versions of Microsoft’s operating system.

You can connect an external display for 1080p output though, at which point Windows 8 Metro app snapping and other features should work just fine. 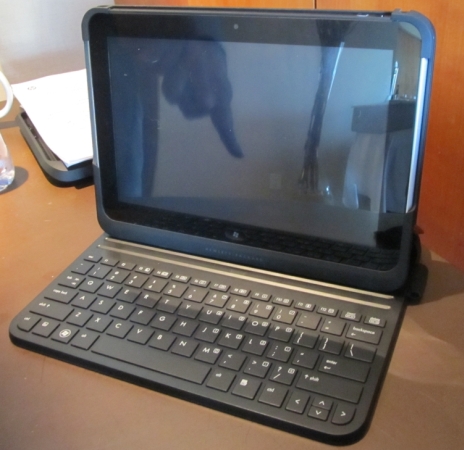 The tablet has 2GB of RAM and will be available with a 32GB or 64GB solid state disk. It has an 8MP rear camera and a 1080p HD front-facing camera. It has stereo speakers, and supports WiFi, Bluetooth, and NFC wireless communication.

Without a smart jacket, the tablet measures 0.36 inches and weighs about 1.5 pounds. It should get up to 10 hours of battery life.

There is a microSDHC card slot built into the tablet, but it’s hidden behind a locked door. You need to use a paperclip or pin to open it up. The idea is that you’ll use the card for semi-permanent storage, not to transfer files to and from the device.

The same door hides a SIM card slot for use on models with optional mobile broadband.

As a business-oriented device, the HP ElitePad 900 features a TPM module, Bitlocker encryption, and other security features.

HP also offers a self maintenance program for larger customers. This provides companies with the tools to repair the tablet in-house, without exposing sensitive data to HP or any other outside organization.

What’s cool about the self maintenance program is that the tablet can be disassembled by opening up a series of magnetic latches which hold the screen to the base of the tablet — so you can basically drop the tablet into one of the tools HP provides to detach those latches and then just slide the device apart to repair or upgrade internal components.

HP won’t begin selling the tablet until early 2013, but the company is starting to send samples to potential customers this month.

Here’s a run-down of the tablet’s specs: