Google is releasing a minor update to Android. The latest build is Android 4.1.2, and Google’s Jean-Baptiste Queru describes the new software as a “minor update” to Android 4.1.1 Jelly Bean.

The update may also let you use the home screen in landscape orientation on 7 inch tablets such as the Google Nexus 7. 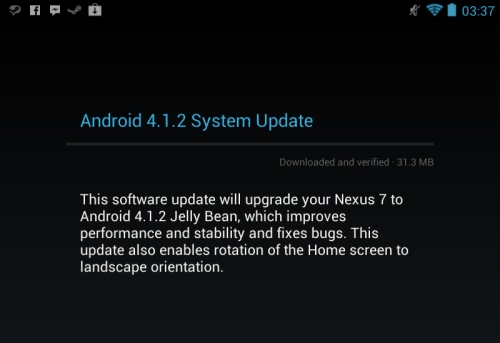 The source code is being released today, and Google is encouraging developers that have built community builds of Android for the Google Nexus 7 to update since there’s a minor change to the power chip in future versions of the tablet that won’t work with Android 4.1.1.

While Google isn’t saying much about what’s new in version 4.1.2, the minor update number suggests this is primarily a performance and stability update.

But it also happens to be the same version of Android that’s reportedly running on the next Google Nexus smartphone. Photos have been making the rounds over the last few days showing an LG Nexus smartphone running the new variant of Android.

The LG phone appears to be similar to the LG Optimus G smartphone which has a 4.7 inch, 768 x 1280 pixel display, a 1.5 GHz Qualcomm Snapdragon S4 quad-core processor, and 2GB of RAM.

via Android Police and Flaz3r