Google may have postponed today’s LG Nexus 4 launch event due to a pesky little hurricane. But Swedish website Swedroid has gone ahead and posted a video of the new phone in action, complete with some new Android 4.2 features. 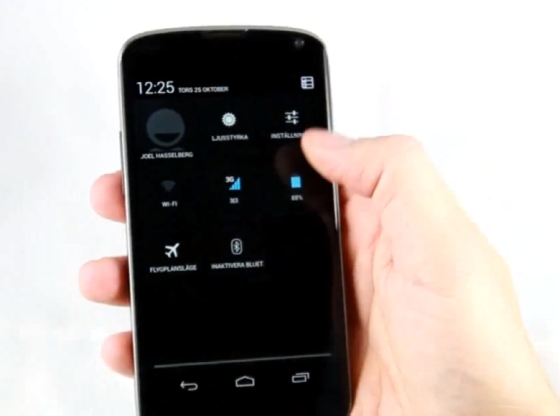 The video is now marked private, but it was visible for a while this morning. Droid Life has also re-uploaded the video.

At first glance, the Nexus 4 appears to be about the same size and shape as the Samsung Galaxy Nexus. But it’s expected to ship with a faster processor, more RAM, and the next version of Android.

The video shows a new Quick Settings feature in Android 4.2. Swiping down from the top of the screen brings up a notification tray. But now you can tap a button in that tray for quick access to toggles for brightness, WiFi, Bluetooth, and other settings.

There’s also a new camera icon and support for multiple user accounts on the same device.

As a Nexus device, the LG Nexus 4 is expected to be a platform for showing off new Android features, and showcasing Google’s idea of what an Android phone could (and perhaps should) be.

The phone is expected to have a 4.7 inch, 1280 x 768 pixel display, 2GB of RAM, 8GB to 16GB of storage, and a 1.5 GHz Qualcomm Snapdragon S4 quad-core processor. It will likely WiFi, Bluetooth, NFC, an 8MP rear camera, and a front-facing camera, but now microSD card slot.

Neither Google nor LG have confirmed those details yet.