Google and Asus haven’t confirmed the existence of a 32GB Nexus 7 tablet yet. But it’s been showing up in retail inventory systems for the last few days, and now it looks like a customer in Japan who ordered a 16GB tablet received a 32GB Google Nexus 7 instead… presumably by accident. 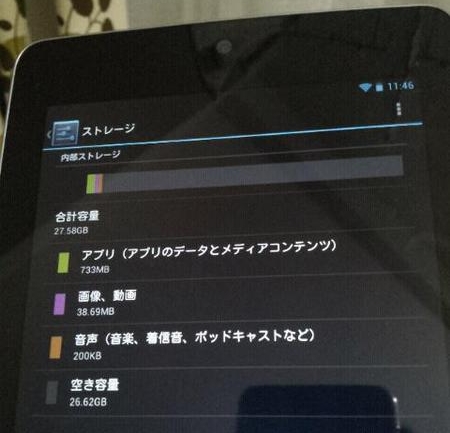 @oppese has posted a few pictures on Twitter, including one showing the box (which says it contains a 16GB tablet, and a second image showing the a Nexus 7 tablet with 27.58GB of usable space.

The Google Nexus 7 features a 7 inch, 1280 x 800 pixel display, a 1.2 GHz NVIDIA Tegra 3 quad-core processor, and 1GB of RAM. It ships with Google Android 4.1, and it’s probably one of the best Android tablets money can buy… especially when you consider the starting price of $199 for a US model.

But the tablet lacks some features you find in higher-priced devices including a rear-facing camera, cellular data, or a microSD card slot for extra storage. So the fact that Google has only offered 8GB and 16GB models so far has been a bit of a problem.

That’s only enough space for a few HD movies or heavy-duty games like Horn (which takes up more than 1.7GB of disk space). So folks that plan to use a Nexus 7 for serious gaming or video playback might want a model with more storage.

It looks like they might have that option soon… or if they’re lucky, Google will ship them one by accident.