Mozilla has released Firefox 16 for Windows, OS X, Linux, and Google Android. That’s not too surprising. Mozilla releases new versions of its popular web browser every 6 weeks at this point. But there are a few nifty features which make the latest release notable. 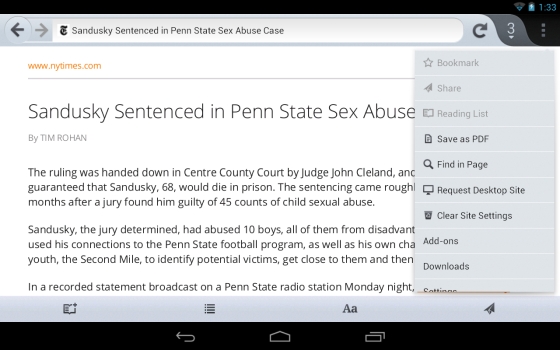 Firefox 16 for Android features a new Reader Mode which works a lot like Reader mode in Apple’s Safari web browser. Once a web page is loaded, you should see a little book icon in the location bar. Tap it and Firefox will reload the web page with black text, a white background, and not much else.

This can make reading long articles easier on a mobile device since you don’t have to contend with sidebars, images, slideshows, and other extra material. Instead the text is formatted to fit your phone or tablet’s display so you can read an article as if you were reading an eBook.

Firefox for Android also now lets you use Firefox Sync through the share menu item. This lets you sync your open tabs with Firefox running on your PC or another mobile device.

Firefox 16 for Windows, Mac, and Linux

The desktop version of Firefox now has initial web app support, letting you “install” web apps as if they were desktop apps. This lets you load them independently of Firefox. But the Mozilla Marketplace web app store isn’t quite ready to go yet. 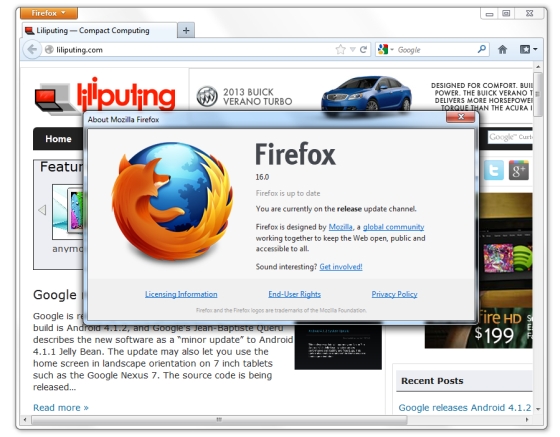 Other changes include preliminary VoiceOver support for OS X, a new developer toolbar, and per-tab reporting in about:memory.