Developers have been having a field day figuring out how to get tablets to run operating systems they did not ship with. We’ve seen webOS running on the Asus Transformer Pad. Ubuntu now runs on the Google Nexus 7. And now developer Hexxeh has started porting Chromium OS to run on the Nexus 7. 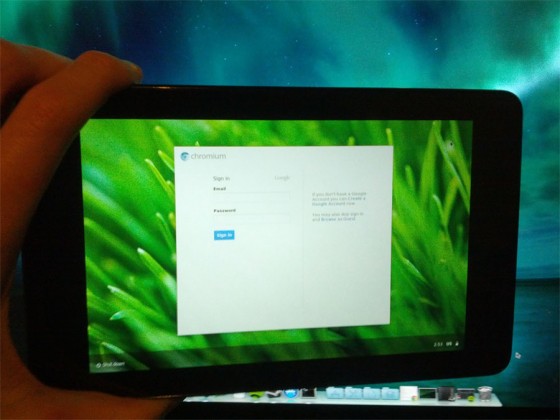 While you can also just install the Chrome browser in Android to get many of the same features, Chromium has a few advantages. It supports Chrome extensions and apps, which lets you use Chrome on a mobile device just the same way it would work on a Windows, Mac, or Linux desktop.

Chrome OS is also a light-weight operating system that boots quickly and resumes from sleep instantly — although it’s not clear if Chromium OS will run as smoothly on the Nexus 7 as Chrome OS does on a Samsung Chromebook.

Hexxeh’s port of Chromium for the Nexus 7 is still a work in progress. He needs to do some “neatening” before it will be ready to release to the public.

Until then, you can always try running Ubuntu on your Nexus 7 tablet. Just don’t expect it to work perfectly either. At this point the camera, Bluetooth, and other features aren’t supported and the user interface isn’t really optimized for mobile devices.