Microsoft is running a promotion that lets you update to Office 2013 for free when you buy a copy of Office 2010 for PC or Office 2011 for Mac between now and April, 2013.

The company hasn’t yet said when Office 2013 will hit the streets, but it’s expected to happen early next year. 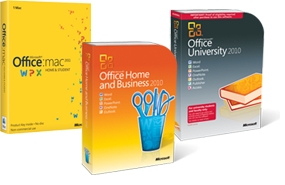 Microsoft offers similar promotions when there’s a new version of the Windows operating system on the horizon. For instance, if you buy a computer running Windows today, you can upgrade to Windows 8 starting Friday for $14.99.

The idea is to convince potential customers that just because there’s something newer on the horizon, that’s no reason not to spend money today.

Of course, if you’re looking for a good reason not to spend money today, there are plenty of free alternatives to Microsoft Office including LibreOffice, Apache OpenOffice, and Google Docs. They may not have all the features found in Microsoft Office, but they’re a lot cheaper.

The lowest priced version of Microsoft Office 2013 is expected to run $140, or $100 per year if you sign up for a subscription package.