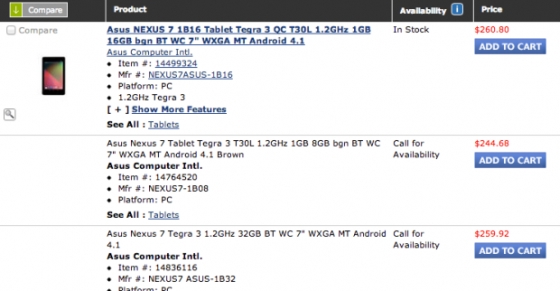 Droid Life received a few tips recently suggesting that the new model could be available later in October.

It’s not clear at this point how much the 32GB model will cost. But if you’ve been holding off on buying Google’s 7 inch tablet because it doesn’t have enough storage space (or a microSD card slot for additional storage), it might be worth keeping an eye out for the new model.

The Amazon Kindle Fire HD and upcoming B&N NOOK HD still have a few features the Nexus 7 lacks, including HDMI output. But the advantage of picking up a Google tablet (which is built by Asus), is that you get Google’s version of the Android operating system with full access to hundreds of thousands of apps in the Play Store.

B&N and Amazon’s tablets feature highly customized versions of Android with their own app and digital content stores. You can root the Kindle Fire HD and install the Google Play Store, but you don’t have to do either of those things with the Nexus 7.