Google is now selling the Samsung Chromebook in the Google Play Store. You can order a WiFi model for $249 and expect it to be delivered in 3-5 business days.

Update: And… now it’s out of stock, but more units are expected soon. Either Samsung didn’t make very many, or $249 is a very good price. You be the judge.

Up until now, the only hardware Google has sold through the Play Store has been the Samsung Galaxy Nexus smartphone and Asus Nexus 7 tablet.

, TigerDirect, and Newegg are also taking orders… but those stores still list the new Chromebook as available for pre-order with a ship date around Halloween. 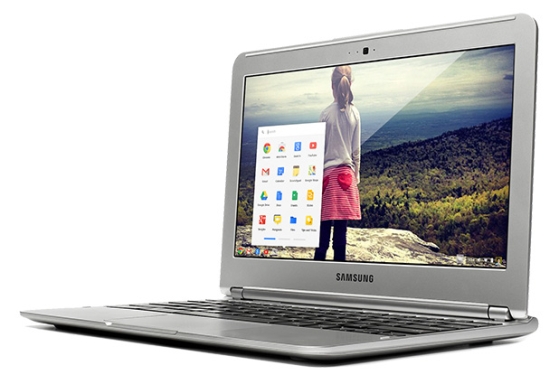 Google is also selling accessories including a hard case and a spare charger.

It runs Google Chrome OS, an operating system designed around the Chrome web browser. Instead of downloading and installing apps the way you would on a Windows PC or an Android tablet, Chrome OS users run web apps such as Gmail, Google Docs, or iPiccy (for editing photos).

Earlier Chromebooks had Intel x86 processors, but the new model is the first with an ARM-based chip. It’s also one of the first devices of any kind to ship with an ARM Cortex-A15 processor.

While even the latest ARM-based chips don’t have as much raw processing power as Intel’s Core Family processors, the Samsung Chromebook has been optimized to play well with the Exynos processor. It boots in 10 seconds, resumes from sleep almost instantly, gets about 6.5 hours of battery life, and feels pretty zippy when surfing the web — even with half a dozen or more browser tabs open.

In fact, I ran a few browser-based benchmarks on the Samsung Chromebook this morning, and found that it got a SunSpider score of 711 (lower is better) and a Peacekeeper score of 1095 (higher is better).

While most modern laptop and desktop computers score higher, those scores are better than I’ve seen from most phones or tablets. And they’re not that far from the scores I got with the Samsung Chromebook 550 this summer. That model has an Intel Celeron 867 processor and scored 606 on SunSpider and 1694 on Peacekeeper.

Anyway, I’ll have more results to share when the full review is ready to go, but right now I’m reasonably impressed with this $249 laptop — especially since customers get 100GB of Google Drive storage at no additional cost for 2 years. That’s a bonus worth about $120 at Google’s current rates.