Canonical has released the first beta of Ubuntu 12.10. The next version of the popular Linux-based operating system is set to launch in October, but you can download the beta today and take it for a spin to check out most of the new features that will be included. 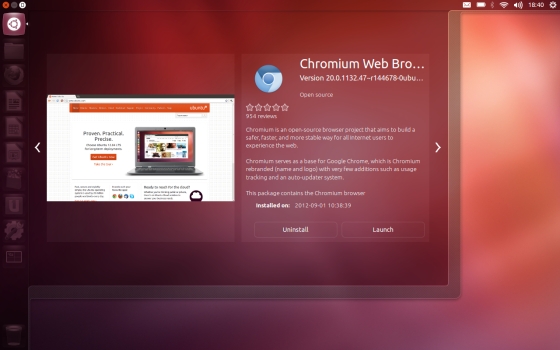 The folks at Web Upd8 have already done that, and you can check out their video overview.

If you haven’t checked out Ubuntu in a while, the biggest changes will probably be in the Ubuntu user interface. There’s a new Previews feature that lets you view live previews of apps, music, movies, pictures, or other data when you right-click on an icon in the Dashboard on the left side of the screen.

The developers are also dropping the Unity 2D user interface for computers with older hardware that doesn’t support 3D graphics acceleration. Instead, there’s a new tool that allows the 3D UI to run on those computers so it’s not necessary to include both versions anymore.

You can grab Ubuntu 12.10 beta 1 from the download page. I wouldn’t recommend replacing your current operating system yet, since this is still beta software and there may be some kinks to work out. But you can run it from a LiveCD or install it in a virtual machine using VirtualBox or a similar tool if you want to kick the tires without waiting until October for the final release.