The ThinkGeek 8-Bitty is a retro-style gamepad designed for use with Android or iOS devices. It resembles a classic Nintendo controller, but it has a few extra buttons which should let you play SNES-style games, or plenty of other games that requires more than A/B buttons.

ThinkGeek plans to start selling the 8-Bitty for $29.99. While the official product page simply says it’s coming “later this year,” the game controller passed through the FCC this week, which is a step any wireless device has to take before it can be sold in the US. So it certainly looks like the 8-Bitty is on the way. 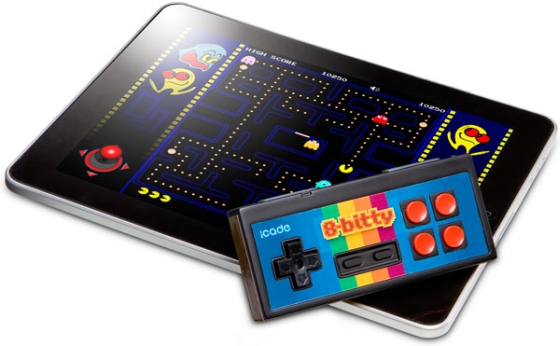 The 8-Bitty connects to a mobile device wirelessly, and it’s small enough to fit in your pocket. It has a D-pad plus 4 buttons on the front, select and start buttons, and right and left shoulder buttons.

It can run the Atari Greatest Hits app on the iPad, which includes a free version of Missile Command. Or you can buy 100 games for $15.

I suspect most folks interested in this type of controller have their eye on Nintendo, Sega, or even PlayStation emulators though.