Spring Design’s new SpringShare apps for Android are designed to let you display content from an Android smartphone on a tablet with a larger screen. The company launched a public beta this week.

Say you’re tired of reading email on your tiny phone and you want a bigger screen to view pictures or fit more text on the screen at once. Just fire up an app on each device and your tablet turns into an external display for your smartphone. 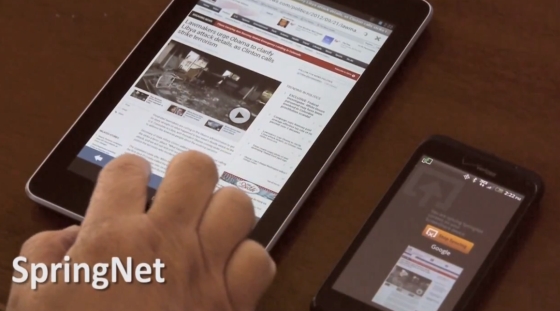 You can also see ScreenShare as a way to use your phone’s mobile data plan to surf the web or perform other activities on a WiFi-only tablet like the Google Nexus 7… sort of.

The Spring Design team has posted a video showing a Nexus 7 connected to a smartphone. If you launch the SpringNet app, you can basically use the tablet like a big remote control for a smartphone in order to surf the web using a custom browser.

There’s also a SpringMail app which syncs your email messages between devices so you can receive messages on the go on your phone, and then read messages or view attachments on your tablet.

But this only works with apps that take advantage of the ScreenShare protocol. You won’t be able to send instant messages, stream videos, or access other types of data without a cellular connection.

Spring Design does plan to release a Software Developer Kit later this year that will let developers add ScreenShare capabilities to their apps though.

The ScreenShare, SpringNet, and SprintMail apps for Android are all free while in beta. Prices will go up to 99 cents each after the beta period ends.