The Barnes & Noble NOOK Simple Touch is an eReader with a 6 inch E Ink display. It’s designed to let you read eBooks, and it can go for weeks or even months at a time between battery charges.

But one of the geekier things that makes the NOOK Simple Touch interesting is the fact that its operating system is based on Google Android… which means you can do all sorts of things with the eReader. You can even run PlayStation games on it. Seriously. 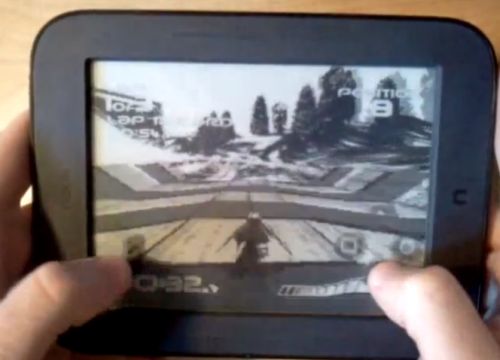 The first thing you’ll need to do is root the NOOK, but proceed with caution since this is a potentially warranty-voiding activity.

Next up, you may want to tweak the system to speed up the screen refresh rate and add multi-touch support — unless you want your games to look like picture slideshows.

Once that’s done, you should be able to install virtually any Android app — including PlayStation emulators such as FPse. Since PlayStation One games can take up a lot of space, it’s handy that the NOOK Simple Touch has a microSDHC card which you can store files on.

Surprisingly, game play doesn’t look half bad. Sure, there’s no color, and the frame rate is slower on the NOOK than it would be on a device with a full color screen and a higher refresh rate. This will also probably wreak havoc on your battery life.

But it’s interesting to see that E Ink screens are capable of much more than simply displaying static text and images.