Chinese device makers have a long history of cloning the design of popular products and selling knockoffs at rock bottom prices. Next in line? Microsoft’s upcoming Surface tablet.

The Surface is a tablet with a 10.6 inch display, Windows RT or Windows 8 software, and a “smart cover” with a touch-sensitive keyboard built in.

Microsoft plans to start selling the first Surface tablets in October. But Chinese manufacture FView is already working on a Surface clone. 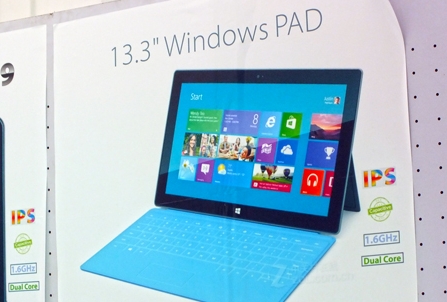 TechDigest spotted promotional material for the Surface knockoff at the IFA trade show in Berlin.

While the image shows a tablet that looks a lot like the Surface (in fact, it might even be a picture of the Surface), there are a few key differences.

The cleverly-named 13.3″ Windows Pad will be powered by an unspecified 1.6 GHz dual core processor and will feature WiFi and Bluetooth.

And that’s about all we know about the product at this point. I wouldn’t be surprised if the device actually looks quite different if and when it launches. I also wouldn’t be shocked if it never launches. But I’ve seen enough Chinese knockoffs that it also wouldn’t surprise me if this Surface-clone hit the streets soon, possibly in advance of the real Surface launch.