Apple and Samsung may be duking it out in courtrooms around the globe, trying to establish once and for all which company ripped off the others’ intellectual property. But that doesn’t mean the two technology companies can’t play nice from time to time.

In fact, it appears that Samsung is manufacturing the iPhone 5’s A6 processor for Apple. 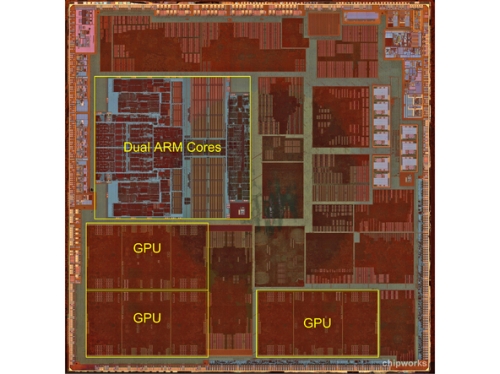 The folks at Chipworks and iFixit dissected Apple’s newest chip and put it under a microscope. As expected, it’s a dual core processor with triple core graphics. It’s based on Apple’s own design, but there are markings which indicate that the processor was actually manufactured at a Samsung plant.

Interestingly, the chip experts report that it looks like Apple laid out the logic blocks in the ARM processor cores by hand, which could help making them faster than chips whose blocks are laid out using computer software.

You can visit iFixit for more details about the A6 processor, as well as close-up images of the WiFi module, LTE modem, audio codec, and other chips that help make the iPhone 5… the iPhone 5.