Apple’s iPhone 5 hit the streets yesterday… and it’s already been jailbroken. Developer Grant Paul (@chpwn) has posted images of his new iPhone 5 with a 4 inch display running the Cydia Store — which only runs on iOS devices that have been jailbroken. 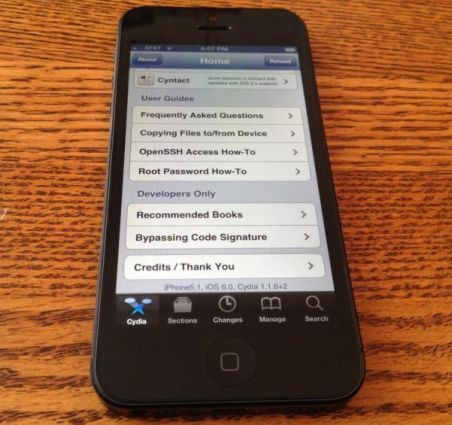 Jailbreaking an iOS device, like rooting an Android phone or tablet, allows you to access files and settings that would otherwise be unavailable. It’s the only way to install apps that aren’t available from the App Store, and it lets you run software that changes the default web browser, alters the way an iPhone handles multitasking, or makes other changes to the operating system.

In order to jailbreak an iOS device, hackers have to find a security vulnerability and exploit it, and apparently chpwn found an existing vulnerability from earlier iOS devices which Apple hasn’t yet fixed in the iPhone 5.

The phone is the first device to ship with an Apple A6 processor, and it runs the iOS 6 operating system, but it looks like neither of those things prevented chpwn from jailbreaking the iPhone 5 and installing Cydia.

There’s no word on when the tools that will let anyone jailbreak an iPhone 5 will be released to the public.