This week Acer planned to launch a new smartphone in China running Aliyun OS. But Google appears to have put a stop to it — and now the California-based search giant is explaining why. 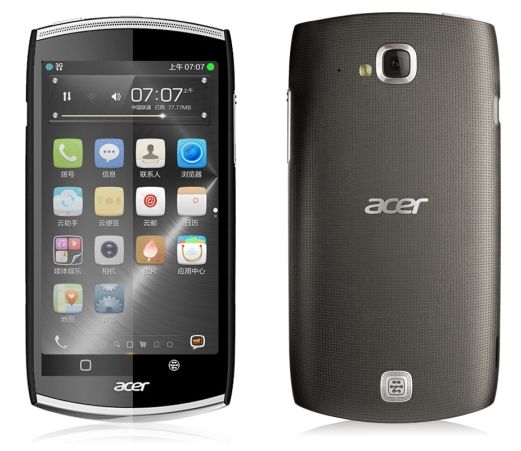 Aliyun OS  is a mobile operating system developed by Chinese e-commerce giant Alibaba. It’s based on open source Android code, but it’s been modified to look and feel different, and it’s designed with an emphasis on web apps in addition to native Android apps — although it runs some of those as well.

Given Alibaba’s importance in the Chinese market, it’s not surprising that Acer and other handset makers are looking at Aliyun OS.

But Acer is also a member of Google’s Open Handset Alliance. Members pledge to take certain steps to, among other things, make sure that their Android devices meet certain compatibility standards.

That’s why Android phones from HTC, Samsung, and Motorola may look very different, thanks to Sense, TouchWiz, or Motoblur skins running on Android — but they’ll all still run pretty much any Android app you can throw at them.

As members of the Open Handset Alliance, device makers get early access to code from Google as well as the ability to include some of Google’s software that’s not open source, such as the Google Apps suite including Google Maps, Gmail, and the Google Play Store.

This week reports surfaced that Google had pressured Acer to cancel its plans to launch an Aliyun OS phone. Google’s Android head Andy Rubin says that’s because Aliyun OS isn’t compatible with Android, even though it’s based on Android source code. He also published a blog post explaining the company’s take on compatibility.

In a nutshell, Android is available as open source software and anybody can do anything they like with it. So there’s no problem with Alibaba developing Aliyun OS or Amazon developing the Kindle Fire OS on top of Android.

But if companies like Acer want to stay part of the Open Handset Alliance, they have to promise not to contribute to forks of Android that are incompatible with the main branch. They can build as many Windows Phone or other competing handsets as they like — but Google is implying that it could boot them from the Alliance if they ship devices with Android-based software that’s been modified so heavily that it can’t run standard Android apps.

If you’re wondering why Google is cracking down on Acer and not, say, Amazon, there’s a good reason. Amazon isn’t part of the Open Handset Alliance.

While Alibaba claims that Aliyun OS doesn’t need to be compatible with Android, because it’s not Android, it’s close enough to cause concern for Google. The company is trying to build an ecosystem that allows millions of devices to run the same apps.

Update: Andy Rubin also responds that Aliyun OS appears to use the Android runtime, framework, and tools in order to run Android apps — some of which appear to be pirated, including the official Google Drive, Google Play Books, and Google Earth apps. Android Police also confirmed that the Aliyun app store is distributing Android apps from other developers without permission.

As Linux blog Muktware points out, compatibility has long been a problem with various Linux distributions. There are hundreds of different Linux-based operating systems including Ubuntu, Fedora, OpenSUSE, and many, many others. While many can run the same open source apps (such as Firefox, LibreOffice, or Pidgin), you can’t just take an app designed for Ubuntu and run it on Fedora. So if a developer like Angry Birds creator Rovio wanted to make a title for “Linux,” which should they choose? Or should they develop a dozen versions?

One answer is clearly to just release the source code and let enthusiasts port the software to run on all operating systems. But that’s not something every developer is going to want to do. So by trying to enforce compatibility, Google is hoping to make sure that TouchWiz, Sens, and other versions of Android aren’t as different as Puppy Linux and Arch Linux. In the process, this could help keep one of the most popular mobile operating systems popular with both users and developers… while Linux continues to hold a distant third place in the desktop operating system world, behind Windows and OS X.

via TechCrunch, The WSJ, Engadget

5 replies on “Google cracks down on “incompatible” versions of Android”