Google will run 5-day, 25 cent sale in the Google Play Store starting this week. The promotion celebrates the fact that users have downloaded 25 billion apps, songs, books, and other digital items from the Play Store.

The company also says the Play Store now has 675 thousand apps and games, which is pretty close to the 700,000 figure Apple likes to throw around for its App Store these days. 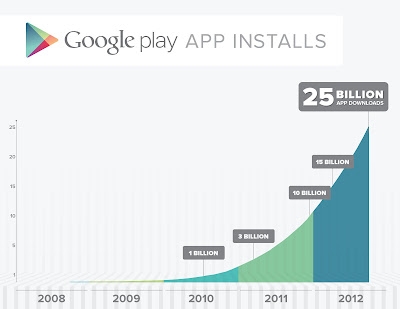 Google’s 25 cent sale will include apps and games from Gameloft, Electronic Arts, Rovio, and others. You can find a list of 25 cent apps at the Play Store.

The promotion will also include “special collections” including 25 movies you “must own”, 25 banned books, 25 albums, and 25 magazines.

While apps and games will be available for just 25 pennies each, all Google is promising for books, music, magazines and movies is that they’ll be available at “special prices.”