The Diamond Multimedia AMP1000 Android Media Player is a set-top-box that you can hook up to a TV to run Android apps on a big screen. It comes with a wireless remote control that you can use like a mouse and a keyboard. It can connect to the internet over Ethernet and WiFi connections, and there are USB and SD card ports that let you plug in removable media.

When the AMP1000 went on sale for about $105 (after rebate) last month, it shipped with Android 2.3 Gingerbread and offered decent overall performance. But now Diamond Multimedia has released an Android 4.0.3 software update.

The update is a bit of a mixed bag. 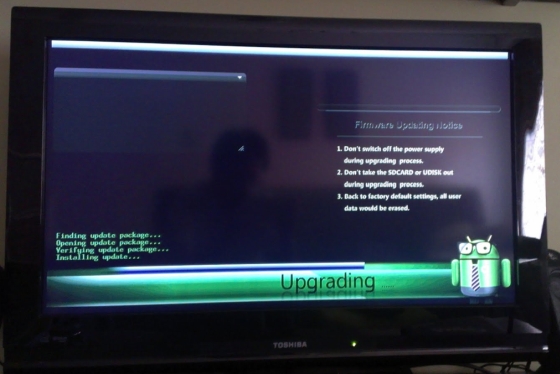 On the one hand, the upgrade process is simple, and the Android 4.0 user interface looks much better on a TV than Android 2.3. That makes sense, because this version of Android was designed for tablets, which have larger displays than the phones that were the target devices for Android 2.3.

On the other hand, the AMP1000 device feels more sluggish at times when running Android 4.0 than the earlier software, and at least one key app doesn’t work after the update: Netflix.

Update: Diamond Multimedia has released a patched version of the Netflix app which works properly. It also adds support for HD video streaming — something the Netflix app didn’t seem to do well with the Android 2.3 firmware.

You can download the new Netflix installer from the Support and Downloads section at the AMP1000 website. Browsing through the user interface with the AMP1000 remote control is a bit of a pain, as the UI seems kind of sluggish. But once you hit the play button, streaming video quality is pretty good.

You’ll also lose any apps, settings, or other data on your device when you upgrade to Android 4.0, so you’ll need to re-download any apps you use that didn’t come with the AMP1000.

Here’s how you upgrade from Android 2.3 to Android 4.0. Keep in mind, there’s no simple way to go back, or any other apps that are working for you right now, you might want to hold off on updating.

Once you have Android 4.0 installed, you get a home screen that looks less cluttered and support for apps that have multi-panel navigation.

For instance, the YouTube app for Android 4.0 includes a sidebar for navigation. And the Gmail app has a two-pane view.

I was also able to install a pre-release version of the XBMC app for Android… but it didn’t work very well. Navigating through on-screen menus using the AMP1000 remote was fairly simple. But XBMC struggled to play 720p MP4 or DiVX videos streamed from a shared network drive. Audio sounded fine, but video playback was choppy at best.

Fortunately, the default movie player included in Diamond Multimedia’s firmware had no problem playing those same files. All I had to do was install ES File Explorer, open the LAN tab, and scan for computers on my home network to find the PC that I use as a DVR and browse the video directory for files to play.

Tapping on any MP4 video automatically launched the movie player. ES File Explorer said it didn’t know how to handle DiVX/AVI files, but if you long-press on those files and “open as” a video, the movie player handles them beautifully.

Interestingly, the Android 4.0 firmware for the AMP1000 comes pre-rooted. You can access files in your root directory, or run apps that require root permissions.

The Android 2.3 firmware was also pre-rooted.

At this point, I’m not sure if it’s worth updating to Android 4.0. Netflix doesn’t work, and while XBMC can be installed, it doesn’t handle video very well. Some other tasks also seem to have slowed down — it takes much longer to download and install apps from the Play Store using the latest firmware, for some reason.

But the user interface looks much better on the big screen, and the default movie player does an excellent job with a range of video formats.

It’s also nice to know that Diamond Multimedia followed through on their promise to release a software update promptly. The AMP1000 has only been available for a few weeks. But I’m kind of hoping there’s another software update in the works which might fix some of the issues with the latest firmware. 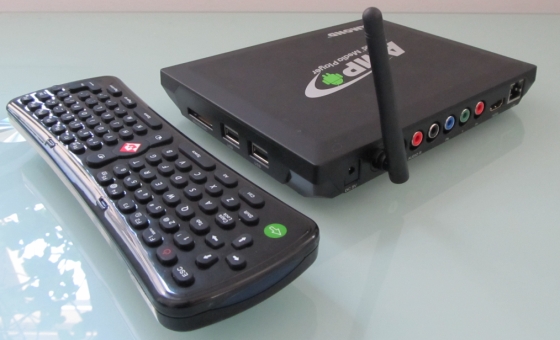 You can find more details about the AMP1000 in my initial review of the hardware and original firmware.