WiFi hotspot provider Boingo Wireless has announced that you’ll be able to get online at 4,000 hotspots around the US for free through the end of September.

The deal is sponsored by Google Play, and you’ll be able to connect to the internet using a laptop, tablet, or smartphone — as long as it isn’t running iOS. 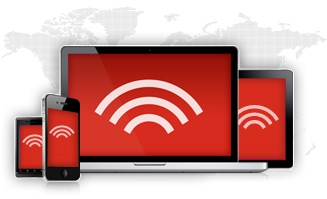 In the announcement, Boingo specifically says users with Android phones or tablets, as well as Windows or Mac laptops will be able to take advantage of the deal.

There’s no mention of iPhones or iPads… or Linux laptops, for that matter.

Boingo normally charges $7.95 per month or more for access to its network of mobile hotspots at airports, coffee shops, hotels, and other locations. Boingo actually maintains 500,000 hotspots around the world, but this promotion will only run at a small fraction of those, including 15 airports (out of the 70 Boingo covers).

In other words, if your airport or other location isn’t called out specifically in the press release, you might was well see if you can login for free the next time you stop by a Boingo hotspot. But there’s no guarantee it’ll work.