Barnes & Noble’s NOOK Color and NOOK Tablet products are tablets designed to run a customized version of the Android operating system. You can use them to read books, stream music and movies, play games, and do much more.

But while B&N offers an app store and eBook store, up until now users have had to rely on third party services like Netflix or Hulu Plus to stream videos.

Now B&N is getting ready to launch its own video store. 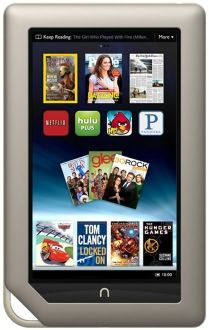 NOOK Video will launch in the US this fall, allowing users to purchase or rent movies and TV shows. It will also hit the UK in time for the holiday season.

Barnes & Noble has signed deals with HBO, Sony, STARZ, Warner Brothers, Disney, and other studios. Titles that will be available at launch include The Avengers, The Amazing Spider-Man, The Artist, Harry Potter movies, Breaking Bad, The Walking Dead, Game of Thrones. Videos will be available in standard definition and HD.

Much like Amazon’s instant video service, NOOK Video is primarily a streaming service. Your content is stored online and streamed to your device, so you can buy once and stream to any device that has a NOOK Video app.

One reply on “B&N NOOK Video store launching this fall”