The Asus Padfone hasn’t exactly taken the world by storm since Asus first introduced the smartphone that can transform into a tablet, notebook, or desktop with liberal use of docking stations. In fact, the Padfone has yet to officially go on sale in the US.

But Asus is getting ready to launch the Padfone 2. 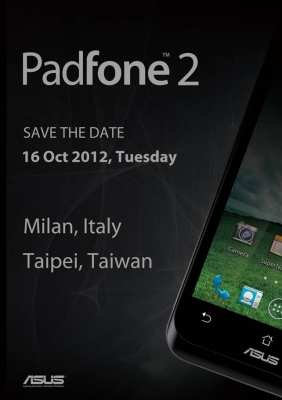 Asus is holding events in Italy and Taiwan on October 16th to introduce the next-generation Padfone.

We got our first evidence that Asus was working on a new Padfone earlier this week when benchmark results for a Padfone 2 hit the web. The benchmark results show a device with a 1.5 GHz with a quad-core Qualcomm Snapdragon S4 processor, and an 1196 x 720 pixel display Which is probably really a 1280 x 720 pixel screen — these benchmarking sites tend to ignore pixels used by the on-screen buttons.

I wouldn’t put too much faith in the new Padfone shipping with that hardware though — benchmark results can be faked, and even if they’re real, they could just depict a pre-release prototype based on hardware that could change before launch.

But it looks like we’ll know more on October 16th.

Update: There’s an image making the rounds that’s purportedly of the retail packaging for the Padfone 2, suggesting it has a 13MP camera, LTE, a 4.7 inch screen and more… but there are some discrepancies in the packaging which could suggest that this is a fake.

7 replies on “Asus to unveil the Padfone 2 in October”