The UG802 is a tiny PC-on-a-stick powered by a Rockchip RK3066 ARM Cortex-A9 dual core processor. It looks a lot like the MK802 Mini PC, but that model has slower, single core ARM Cortex-A8 Allwinner A10 CPU.

South African distributor Reno Botes has been keeping us up to date on the progress of the UG802 for a few weeks, and now he’s shared some videos showing the little PC in action. 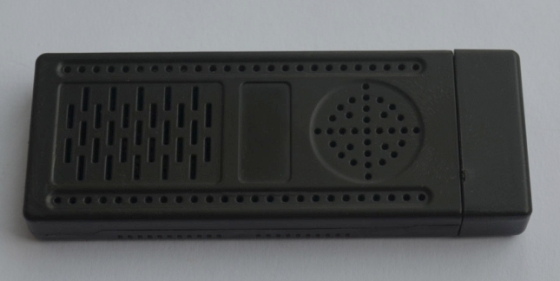 The UG802 looks like a USB flash drive. But there’s a fully functional little computer under the plastic case.

On one end is an HDMI connector which lets you plug the device directly into a display. There are also USB ports for power or for connecting a keyboard, mouse, or other peripheral.

Under the hood, there’s 1GB of RAM, 4GB of storage, a microSD card slot for extra storage, and an ARM Mali 400 graphics chip.

The device runs Google Android 4.0 Ice Cream Sandwich and includes access to the Google Play Store, which makes downloading apps simple. Most Android apps and games are designed for touch-based input, so they may not be as easy to control on a TV screen. But you can use a keyboard, mouse, or remote control to handle video playback, web browsing, or video games, among other things.

While the UG802 supports WiFi, Botes also confirms that you can plug in a USB 3G dongle and surf the web over a mobile broadband network.

Botes is selling the device through Ugoos.com, but you have to email or call to confirm pricing. He says they should cost about $89 per unit.

A quick scan of AliExpress shows a number of retailers selling products with the UG802 name for even lower prices… but AliExpress sellers have a habit of stuffing keywords into their product listings, so it’s not entirely sure you’ll get what you pay for if you order from some of those stores.