Oval Elephant is selling a new Android TV box for $84.99. It’s a small set-top-box designed to let you run Android apps on a TV.

For instance you can stream video from YouTube or Netflix, surf the web, or play games. You can also run a pre-release build of the XBMC media center developed for the Pivos XIOS — a device with similar hardware. 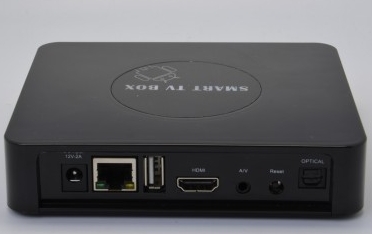 It also features an Ethernet jack, A/V jack, an HDMI port, 2 full-sized USB ports, and an SD card slot. The device ships with an infrared remote control and an HDMI cable.

Out of the box, the device runs Google Android 4.0 software and includes support for the Google Play Store, which makes downloading and installing apps simple.

But hacker/developer J1nx took a look under the hood and noticed a few interesting things, including a UART connection and additional USB host connections. This could make it possible to connect additional peripherals, modify the board, or work out ways to load alternate operating systems on the TV Box.

Oval Elephant has limited quantities of the Android TV Box available, and the next shipment is scheduled for September 14th. The $85 price is good through September 9th. After that the price tag goes up to $90.

That’s still cheaper than the AMP1000, an Android TV box with a similar processor which I recently checked out — but the AMP1000 also comes with a more versatile RF remote control.