Apple is now taking pre-orders for the latest iPod touch. The iPod touch 5th generation will ship in October, but if you visit the Apple Store website today you can reserve a 32GB model for $299 or a 64GB model for $399. 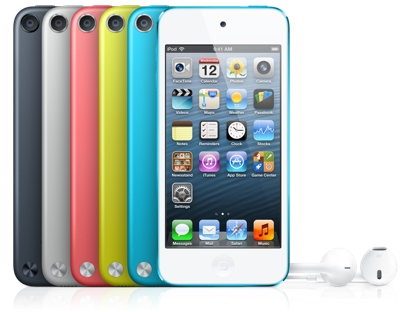 In a nutshell, it’s an iPhone 5, but with a thinner case, no cellular capabilities, and the same processor as the iPhone 4.

That makes the 5th generation iPod touch a pretty powerful media player and portable gaming device. It’d also be a pretty good eReader, or addition to a home entertainment system — it supports AirPlay mirroring, which lets you stream games, videos, and other content to an Apple TV.

The $299 starting price might seem pretty steep, but if you don’t need the faster processor, bigger display, extra storage, or improved camera you can still pick up a 4th generation iPod touch.

In fact, Apple has discontinued the 8GB model and dropped the price of a 16GB iPod touch 4th gen to $199.

Meanwhile, pre-orders for the iPhone 5 also started today. Apple’s latest smartphone starts at $199 when you sign up for a wireless contract.

There’s no contract-free option available at the moment, but TechCrunch reports that prices will start at $649 for a 16GB iPhone 5 if you don’t sign up for a wireless plan.

The company is already sold out of its first shipment, but you can still place an order. Your new phone just won’t arrive for a few weeks.