It’s only been a few months since Toshiba introduced its U845 ultrabook, but the company is already starting to show off its next 14 inch ultrabook models. Engadget reports the Toshiba Satellite U945 and P845t will both launch on Ocotber 26th when Windows 8 is released. 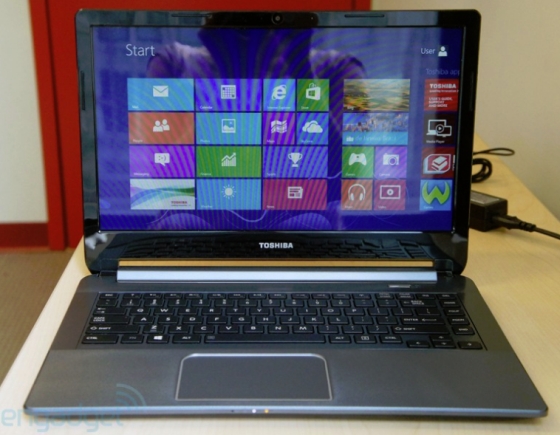 This laptop is basically what you get if you take the Satellite U845, load it up with Windows 8, and replace the metal case with a cheaper plastic design.

The good news is that Toshiba is also dropping the price. You’ll be able to pick up this portable laptop for about $700, or $50 less than the current price of a Satellite U845.

Toshiba will offer the laptop with Core i3 and Core i5 processor options, a 500GB hard drive and 32GB solid state disk. It will measure 0.78 inches thick and feature 2 USB 3.0 ports, a USB 2.0 port, Ethernet and HDMI.

If you want a Windows 8 tablet that transforms into a notebook (or vice versa), Toshiba is offering up the Satellite U920t. But if you just want a touchscreen on a standard laptop, there’s the Satellite P845t.

This notebook will feature a Core i3 or Core i5 CPU, 6GB of memory, 3 USB 3.0 ports, HDMI and Ethernet, Harman Kardon speakers, and a 750GB hard drive with solid state cache.

Unlike the cheaper U945, this notebook will have an aluminum case. Toshiba hasn’t revealed the price of its touchscreen ultrabook yet — but it’s safe to say that a model with a metal case and touchscreen will be cheaper than a plastic model with a standard LCD display.