Tired of tablets with puny 10 inch displays? Sony’s got an answer: the Sony VAIO Tap20, a Windows 8 computer with a 20 inch display. You can use it as an all-in-one desktop, or as an enormous tablet. 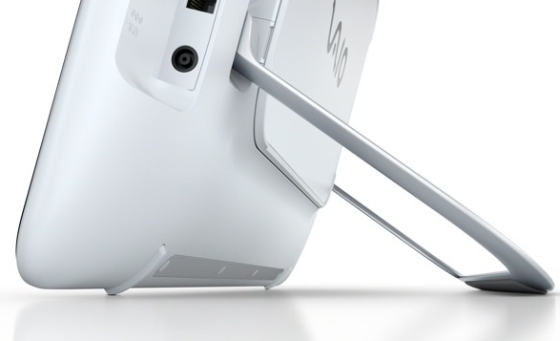 There’s a kick-stand built into the back of the machine, letting you prop it up on table or desk for use as a standard desktop PC. Just plug in a keyboard and mouse, and away you go.

But the Sony VAIO Tap20 also has a touchscreen display and a built-in battery, which lets you carry it around the house and use it like a tablet.

I wouldn’t expect iPad-like battery life out a device with a screen that large. But if you want to look up recipes in your office and then carry the computer into the kitchen where you can use it as a reference, you can do that without powering down the machine, unplugging it, and moving it.

The computer will be available with an Intel Core i3, Core i5, or Core i7 Ivy Bridge processor, up to 8GB of RAM, and up to 1TB of hard disk space. Each model features Intel HD 4000 graphics.

A large-screen tablet-like device could also be laid flat on a table for playing digital board games or performing other group activities.

Sony hasn’t provided all the specs for the Vaio Tap20 yet, but MobileGeeks reports it will be available in late October for 999 Euros and up.