Samsung’s Galaxy Player line of devices are basically what you get if you take an Android smartphone and remove the cellular capabilities. In other words, they’re portable media players, web surfers, and gaming devices designed to be used over a WiFi network.

They’re kind of like Android versions of the iPod touch… but while the iPod touch comes in one size only (with a 3.5 inch display), Samsung offers a range of Galaxy Players with screens as small as 3.2 inches… and now as large as 5.8 inches. 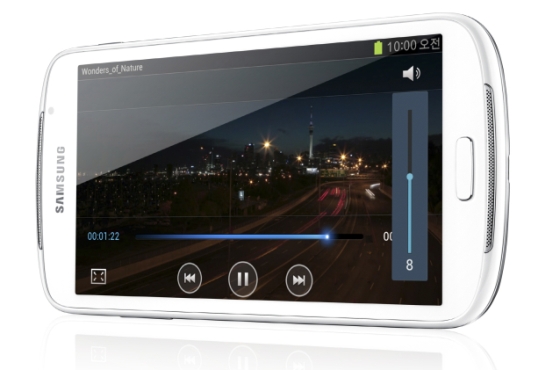 I suppose that’s a good thing if you plan to set the media player down on a table to watch a video or just want a portable web browsing companion that you don’t have to hold too close to your face.

Samsung hasn’t officially announced what processor the big guy will have, but according to a document that leaked earlier this month, the Galaxy Player 5.8 will have a 1 GHz dual core processor, as well as an FM Radio, Bluetooth, and stereo speakers.