Normally the tablet alone sells for $249, but Best Buy is expected to start selling a “Student Edition” next week that will bundle the tablet with a keyboard and USB adapter for the same $249 price.

But at least one person walked into a Best Buy and purchased a Student Edition bundle a week early. 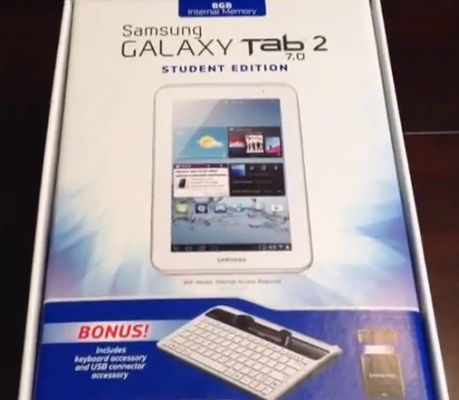 As expected, the bundle includes a keyboard docking station that will make text entry on the tablet much easier. The USB adapter lets you connect other peripherals to the tablet despite the fact that it has a proprietary docking port rather than a standard USB port.

Unlike the standard gray Galaxy Tab 2 (7.0) I reviewed a few months ago, the Student Edition has a white plastic case. Otherwise the two tablets are virtually identical.

That’s not a bad thing — the 7 inch tablet is one of the best around. It doesn’t have the high-resolution display or quad-core processor you get with the Google Nexus 7, but it has two cameras, while the Nexus 7 has one, and Samsung’s tablet has a microSDHC card slot.

The bundled keyboard could sweeten the deal for some folks.

Best Buy isn’t expected to make the new Student Edition bundle widely available until August 19th, but it looks like if you get lucky, you may be able to pick one up sooner than that.