Most smartphones feature cameras. But the Samsung Galaxy Camera is something else — it’s first and foremost a camera with a high quality lens. It just happens to have the elements of a decent smartphone or media player including a 4.8 inch touchscreen LCD and Android 4.1 Jelly Bean operating system. 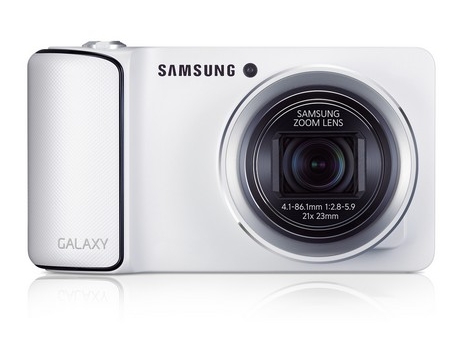 The Galaxy Camera doesn’t just let you snap photos. You can also edit them on the device and upload them to Facebook, Twitter, or anywhere else using a WiFi, 3G, or 4G connection.

You can’t make phone calls with the camera, but if you use the mobile broadband features, you can instantly post your photos online wherever you have a wireless signal.

Samsung also bakes in a feature that lets you automatically backup photos to the cloud or sync them across other devices that use Samsung AllShare including a Galaxy S III smartphone or Galaxy Note smartphone.

The camera has a 16 megapixel sensor and a 21x zoom lens.

While this is a camera, the spec-list reads like a data sheet for a smartphone. The Galaxy Camera features a 1.4 GHz quad-core processor, 8GB of built-in storage, and a 1650mAh battery. There’s also a microSD card for extra storage.

It features support for the Google Play Store, which provides access to thousands of Android apps, games, and other digital content.

This isn’t the first Android-powered camera we’ve seen. Nikon recently introduced the Coolpix S800c with Android. But Samsung isn’t just a camera maker slapping Android onto a point-and-shoot. The company is one of the top makers of Android smartphones, makes its own mobile processors, and has also been selling cameras for a while.

Update: AT&T has announced it will offer the Samsung Galaxy Camera with 4G in the US.

via PocketNow and Laptop Magazine

28 replies on “Samsung Galaxy Camera is powered by Android”