Watch maker Phosphor has been making high-end digital watches for a while. But the company’s upcoming Touch Time wristwatch is the first to feature a touchscreen display.

The idea is that you’ll be able to set alarms, adjust the time, or perform other actions by swiping your finger across the screen without fiddling with any buttons. It brings a smartphone-like experience to a digital watch. 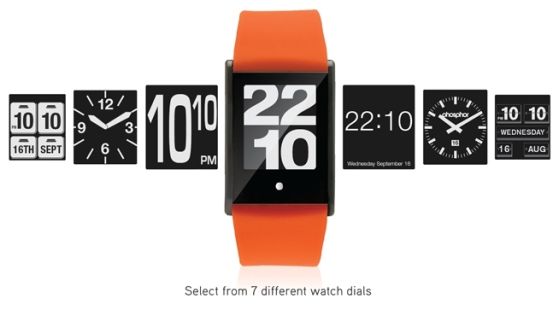 But the Touch Time isn’t a smart watch, per se. It’s not internet-connected and it doesn’t run apps.

It does have a few nifty tricks though. You can choose between 7 different clock views, and you can invert the color (to show black charaters on a light background or white text on a black background).

The watch has a 144 x 168 pixel LCD display, is water resistant up to 30 meters, and supports a number of languages including English, French, Spanish, German, and others.

There’s a stopwatch feature, support for up 6o 6 alarms, a world time display, a calculator, and a moon phase function.

Since the Touch Time isn’t a smart watch it doesn’t use much energy. Phosphor says it will run for a year or longer using a standard watch battery.

Phosphor is running a Kickstarter campaign to take pre-orders for the Touch Time. You can order one with a pledge of $89 or more. Watches will ship around November.