Lenovo is preparing to launch a new tablet aimed at business users. Dubbed the ThinkPad Tablet 2, I suppose it’s supposed to be a sequel to last year’s Lenovo ThinkPad tablet. But while the original ran Google Android, the new tablet is designed for Windows 8. 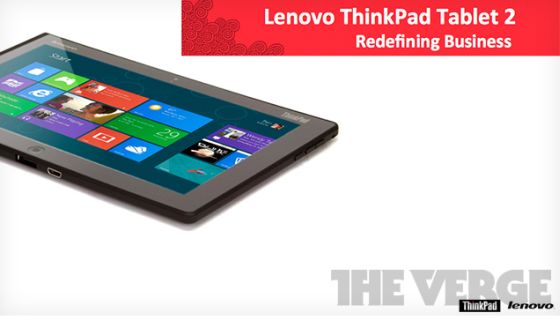 The folks at The Verge have obtained a leaked document with the specs for the ThinkPad Tablet 2.

The device is expected to feature a dual core Intel Atom Clover Trail processor, 2GB of memory and 64GB of storage. It will have a 10.1 inch, 1366 x 768 pixel display, WiFi, and optional 4G.

Business-friendly features include a fingerprint reader and an optional digital pen. Lenovo will also offer a keyboard docking station.

We got out first look at the tablet during the Computex trade show in June, but at the time Lenovo hadn’t actually named the tablet yet. It’s expected to launch around the time Windows 8 is released in October.