Samsung’s new 10.1 inch tablet hit the streets last week. It features a speedy 1.4 GHz Exynos Quad processor, a 1280 x 800 pixel display, 2GB of RAM, and a digital pen for writing or drawing on the screen. But we knew all that, because Samsung told us.

The folks at iFixit know that beauty isn’t only skin deep though. So they took apart a Galaxy Note 10.1 to see what lies below the surface. 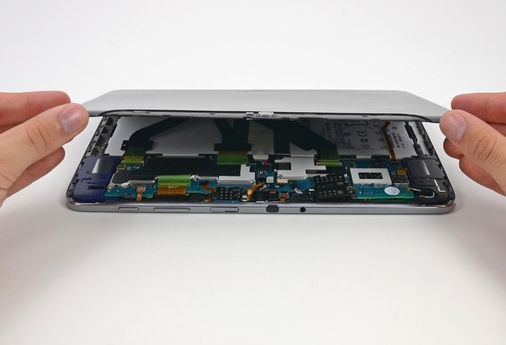 The good news is that the tablet is pretty easy to open up. While replacing a faulty display or other component can be a bit intimidating, the Galaxy Note 10.1 is held together by just a few standard screws and plastic clips, so it’s pretty difficult to break just by lifting the screen from the case.

The LCD can also be separated from the glass, which means that replacing a cracked screen should be relatively inexpensive if your LCD is still functioning.

iFixit also notes that there are a lot of different connectors — which indicates that it should be pretty simple to remove individual components (rather than having to replace the entire system board) if anything breaks.

You can find more photos, step-by-step dissection instructions, and commentary at iFixit.