Ergo Electronics is introducing a new 10 inch netbook in the UK. The GoNote features a 10 inch, 1024 x 600 pixel display, much like every other netbook released in the last few years.

But under the hood, this £149 ($235 US) mini-notebook is a little different. It has an ARM-based processor, a resistive touchscreen display, and Google Android 4.0 Ice Cream Sandwich operating system instead of Windows. 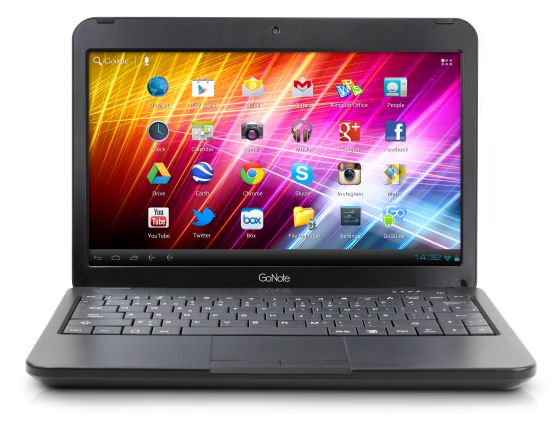 There’s a QWERTY keyboard and touchpad, so you can navigate with an on-screen cursor, much as you would on a Windows laptop. But the 2-point multitouch touchscreen makes it easier to interact with Android apps that were designed for touch.

The netbook also features a webcam for video chat, 4 USB 2.0 ports for connecting peripherals, and a mini HDMI port for hooking up an external display. Ther eare also mic and headphone jacks and a micro SD card slot for extra storage.

Ergo’s GoNote netbook is powered by a 1.2 GHz Rockchip RK2918 ARM Cortex-A8 single core processor. It has 1GB of RAM and 8GB of built-in storage.

The netbook is aimed at students, and includes a copy of Kingsoft Office for creating and editing Microsoft Office-compatible documents. It also includes access to the Google Play Store, which means you can download and run hundreds of thousands of apps on the netbook.

According to Ergo Electronics, you should get up to 6 hours of continuous run time while surfing the web over WiFi thanks to the 9000mAh battery. The netbook can get up to a week of standby time.

The RK2918 processor is a budget chip that offers moderate performance at best, but it should be up to the task of performing basic Android tasks. You can find a number of Windows 7-based netbooks with Intel Atom processors for under $300 these days, but few of those feature touchscreens and out-of-the-box support for Android apps.