Giada has introduced yet another tiny desktop computer. The Giada i35V is the third model we’ve seen this month, and it’s just as little as Giada’s other small-form-factor computers. But what makes the Giada i35V Mini PC stand out isn’t the 1 inch-thick case. It’s what’s under the hood. 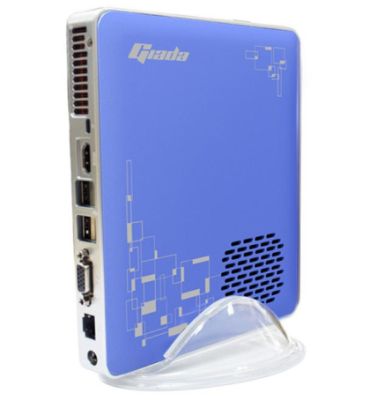 The computer features a 1.86 GHz Intel Atom D2500 dual core processor, Intel GMA 3600 graphics, and 2GB of RAM. But instead of a hard drive, it uses an mSATA solid state disk for storage.

That should help keep power consumption down, since SSDs use less energy than hard drives. They also generate less heat, which should help keep the computer cool. A decent solid state disk is also generally faster than a hard drive — but Giada hasn’t provided the read/write speeds of this particular SSD.

Unfortunately the solid stat disk doesn’t provide as much storage space as a typical hard drive. The Giada i35V ships with just 16GB of storage. There’s also a 2.5 inch hard drive bay though, and Giada plans to sell some models with a 320GB hard drive.

It measures 7.6″ x 5.9″ x 1″ and consumes about 24 watts of power. The computer ships without an operating system, but it should be able to handle Windows 7 or most popular Linux-based operating systems.