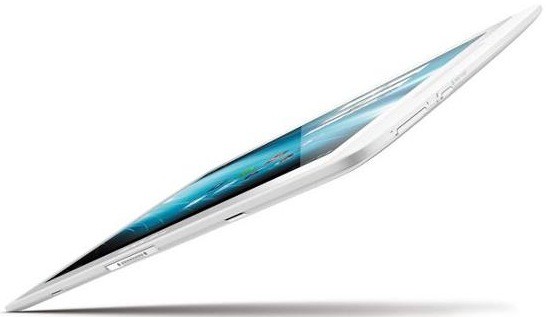 The Archos G10 xs is one of many tablets the company teased earlier this year, and it’s a bit of a departure from its previous offerings. The G10 line-up will arrive with Google certification, and that means full access to all the goodies offered on Google Play — no rooting or modding required. This particular model also features something that’s become increasingly common on Android tablets ever since the Asus Eee Pad Transformer got the ball rolling: a detachable keyboard dock.

Archos did previously offer a brief video teaser that showed the G10 xs swivel and separate from its keyboard, but if you’ve been waiting to get a better look at the tablet itself, well… you’ll have to keep waiting. Archos did, however, post an off-angle image of the tablet on its official Facebook page that provides a peek the at the G10 xs in its gloss-white glory.

Apart from the glamorous press shot, Archos also announced that the official launch will happen before the end of the month.

As for what’s lurking inside, all that’s certain is the presence of a mini HDMI port, microSD storage expansion, and a micro USB port for charging and data transfer. It’s also expected to feature a TI OMAP 4770 processor, though that has yet to be confirmed. Archos will no doubt clear the air in three weeks when the X10 gs officially makes its debut.

4 replies on “Archos G10 xs makes an appearance on Facebook, launches this month”