Archos has pulled the wraps off its Gen10 XS line of Android tablets. The first to hit the streets will be the Archos 101 XS, a 10 inch Android tablet that should launch in Europe next month, and should hit the US in November for $399.99. 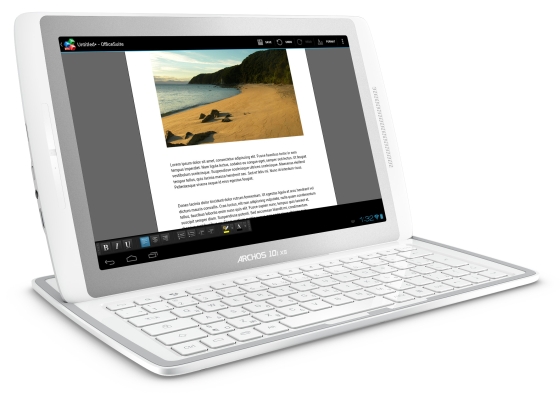 The first thing you’ll notice about the Archos 101 XS is the included magnetic “coverboard.” It’s a screen cover that attaches to the front of the tablet using magnets, but if you flip it over you’ll find a QWERTY keyboard on the other side of the coverboard.

There are no batteries in the coverboard. Instead, it draws power from the tablet. But if you need more run time, you can connect a charger to the coverboard while it’s in use.

At launch, the Archos 101 XS will ship with Android 4.0 Ice Cream Sandwich, but Archos will offer an Android 4.1 software update later this year.

Archos has been sending out demo units to reviewers at tech publications. Apparently mine got lost in the mail, but here’s a roundup of some of the reviews I found today:

Reviewers seem to like the idea of the coverboard, but most found its execution a little clumsy. The CPU isn’t exactly a speed demon when compared with top-of-the-line chips from Samsung and NVIDIA, but the graphics chip appears to hold up pretty well.

Battery life seems to top out at around 6 hours.

All told, the Archos 101 XS sells for twice the price of a Google Nexus 7… but it’s about the same price as an Asus Transformer Pad TF300T tablet. The difference is that Archos throws in the keyboard case/dock for free, while Asus charges extra for a keyboard (and includes a quad-core processor).

Archos will offer optional accessories including a speaker dock and a docking station with a USB port for a hard drive and RCA audio ports for connecting your own speakers.

The company also plans to launch 8 and 9.7 inch Gen10 XS series tablets later this year, called the Archos 80 XS and Archos 97 XS. Both will also come with coverboards.