Amazon is holding a press event next week to launch something. While the company still hasn’t said what they’re introducing, today the company offered a big hint. Amazon sent out a press release letting us know that the Amazon Kindle Fire is “sold out.” 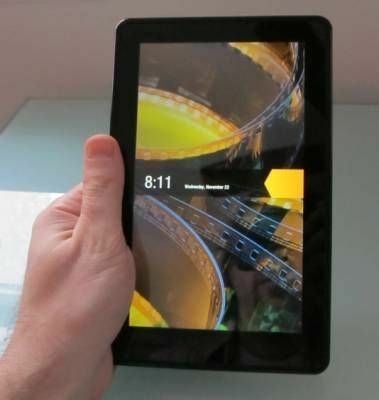 The company says the Kindle has been its best-selling product for the past 48 weeks.

Normally when a device is out of stock, companies don’t bother sending out press releases. In this case, it’s a pretty good hint that Amazon is about to replace its first 7 inch Android tablet with something new.

It’s likely that the next Kindle tablets will have new features such as faster processors, larger and/or higher resolution displays, and competitive prices to take on Google’s $199 Nexus 7 tablet.

In fact, we could see as many as 5 or 6 different models.

Meanwhile, if you’re looking for a bargain on the original Kindle Fire, you can still pick up used models from the Amazon Marketplace. They’re going for around $170, or $30 off the list price.

The original Kindle Fire may be old news (in the tech world, anyway, where things change pretty quickly), but it’s still a pretty good tablet with a 7 inch, 1024 x 600 pixel IPS display, a 1 GHz TI OMAP 4 dual core processor, and Android 2.3-based operating system. If you’re the adventurous sort, you can also install Android 4.1 Jelly Bean.