VIA has introduced a new Pico-ITX computer board called the VAB-800. It measures less than 4″ x 2.9″ across, and VIA is positioning the board as a solution for industrial or in-vehicle applications.

But like the VIA APC, the Raspberry Pi, and any number of other cheap, low power barebones computers we’ve seen this year, I suspect a fair number of hobbyists would be interested in getting their hands on something like the VAB-800 to run Android or Linux apps. 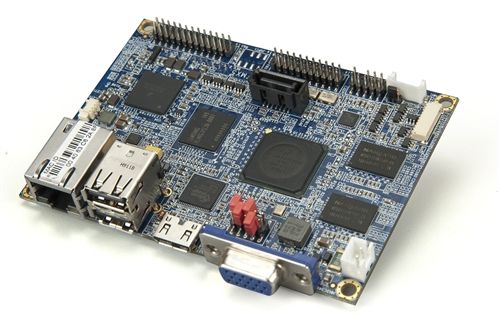 The VAB-800 is available with a Freescale 800 MHz or 1 GHz ARM Cortex-A8 processor. It has 1GB of integrated RAM and supports up to 64GB of flash storage.

It also offers far more connection ports than you’ll find on a Raspberry Pi, with 2 USB 2.0 ports, a mini HDMI port, an Ethernet jack, VGA port, and a number of additional connectors for cameras, audio, storage, and other peripherals.

The computer officially supports Google Android 2.3, Ubuntu 10.04, or Windows Embedded Compact 7, although I wouldn’t be surprised if you could trick it into running some other operating systems as well.

The VIA VAB-800 is a low power device, with average power consumption of about 2W and a maximium TDP of 5W.

VIA is already making sample units available to potential customers, but you have to contact VIA if you want details on the price.