The Amazon Kindle Fire made waves when it hit the street last year. At the time, it was one of the best tablets available for $199, offering a dual core TI OMAP4 processor, a 7 inch, 1024 x 600 pixel display, and an Android 2.3-based operating system.

Sure, it had an unusual user interface and it was tied to Amazon’s app, music, and movie stores rather than Google’s. But under the hood it’s an Android tablet and you’re not worried about voiding your warranty, you can even tweak it to run Google Android 4.1 Jelly Bean.

But a lot’s changed since the Kindle Fire came out, and it’s not exactly the best $199 tablet money can buy anymore. So it’s no surprise Amazon is working on a successor. What is a little surprising is that Reuters reports there could be as many as 5 or 6 new tablets from Amazon in the works. 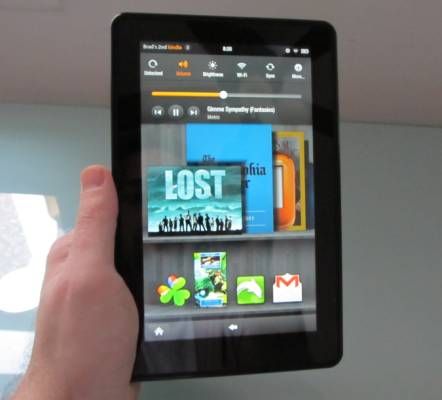 That comes from an executive as Staples, one of Amazon’s retail partners for the Kindle Fire.

According to the report, Amazon will offer tablets in multiple sizes, including a new 10 inch model. To be fair, it’s possible we’re really just talking about 2 real models: a 7 inch and a 10 inch tablet — with multiple versions of each. For instance, 8GB, 16GB, and 32GB versions.

Amazon can generally keep the prices of its hardware products low because the company makes money by selling eBooks, music, movies, and apps to customers that buy a Kindle or Kindle Fire.

But the user experience is a bit of a mixed bag. While the number of apps in Amazon’s Appstore for Android number in the tens of thousands, there are more than 10 times as many apps available in the Google Play Store — which you can’t access from a Kindle Fire unless you root the tablet.

Google, meanwhile, has its own $199 tablet which does have access to the Play Store. But Amazon’s music, video, and book stores offer a wider selection of content than Google’s store.

The good news for customers is that there’s nothing preventing you from picking up a Google Nexus 7 tablet and installing the Amazon app, music, and book stores and downloading content from Amazon or Google.

But I suspect most people just use the content store that comes preloaded on their device (much the way most people just used the default web browser that came on their computers for many years, which is why Internet Explorer has been so popular for so long). And that’s why it’s unlikely that Amazon will decide to sit back and let Google take over the $199 tablet space.