The Rikomagic MK802 is a PC-on-a-stick that generally sells for around $80 or less. You connect it to a TV, plug in a mouse and/or keyboard, and you’ve got yourself a little computer that runs Google Android and which can download apps and games from the Google Play Store.

The MK802 can also run a number of different Linux-based operating systems such as Ubuntu, Fedora, and Puppy Linux.

But Andy Kirby at the Rikomagic UK forums says the Chinese device maker is working on a next-generation unit with a tweaked design. 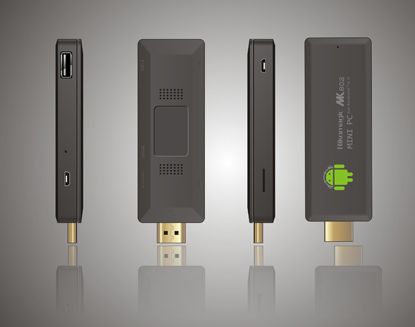 The MK802 II will feature a full-sized HDMI connector, letting you plug the stick right into a monitor or HDTV without using an HDMI cable.

It will also have 3 USB ports (2 micro and 1 standard sized port).

The rest of the features are staying pretty much the same, which means it will have the same Allwinner A10 processor and Mali 400 graphics as the current model. The case appears to have some extra holes for ventilation though.

While a faster processor would be nice, there’s at least one advantage to sticking with the Allwinner A10. There’s currently a lot of independent software development around this chipset.

A number of other tablets and mini PCs such as the Mele A1000 set-top box and the latest Coby Kyros tablets use the same processor, which makes it easier to port Linux-based operating systems and other software to run on the MK802.