The HP TouchPad tablet and Pre and Veer phones were the last devices to ship with HP’s webOS software. So when HP canceled those products last year, it’s no surprise that the pace of development for webOS slowed to a crawl.

Sure, HP released a couple of software patches, and a handful of developers released some new apps — many of which were likely in development before HP canceled the platform.

But for the most part, folks who picked up HP TouchPad tablets last summer had something else in mind. When HP slashed prices and let people pick up tablets for as little as $99, a lot of people picked up the tablets with Android stars in their eyes.

Not long after that, a group of independent developers figured out how to install Google Android on the HP TouchPad, and at this point, Android 4.0 runs really, really well on the HP TouchPad. Just about the only thing that doesn’t work is the camera, but you can run hundreds of thousands of Android apps that don’t need camera access on the HP TouchPad. 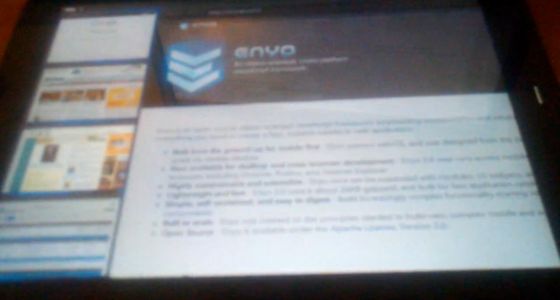 But a funny thing happened recently. HP is working to release webOS as open source software. Later this year the company plans to release open webOS, a fully open source version of the TouchPad’s operating system. But HP has already released something else — webOS Community Edition.

The Community Edition release includes most of the source code for webOS 3.0.5 that HP was able to release. There are still some proprietary bits that HP doesn’t have the rights to distribute.

Independent developers have already started doing some pretty nifty things with the code that is available though. While HP hasn’t released a major webOS update since last year, developers have started to change the way multitasking works and add support for alternate keyboards to the TouchPad’s operating system.

Last week we saw a tweak from Dave Freeman which lets you switch between running apps by flicking from the side of the screen.

Now another developer named Andrew Holbrook has come up with an even more elaborate multiasking tweak.

There’s also a feature called “stacks” which groups related activities together. The result looks sort of like a pack of cards spread out with one on top of another. For instance if you tap a URL in your email to open a web browser window, the cards for your email and browser apps will be stacked together.

Anyway, Holbrook’s tweak lets you view thumbnail icons for all of the cards in your stack in a sidebar. This lets you switch between related tasks without going back to the card view at all.

Meanwhile, developer Måns Andersson decided he’d like to change the keyboard layout to add support for Swedish, Dvorak, and other designs.

While it isn’t clear whether HP or any other company will ever release a phone, tablet, or other device running webOS in the future, it’s clear that there are a number of existing webOS users who are willing to help keep the platform alive indefinitely.

It’s only been about a week since HP released webOS Community Edition, and developers are already starting to use the source code to come up with new and interesting ways to use the HP TouchPad. I can’t wait to see what they come up in the coming months and years.

A group called Phoenix International Communications also plans to work to port webOS to run on existing devices that currently run Android or other operating systems, with the hope of eventually developing new webOS hardware. If independent developers such as Holbrook, Freeman, and Andersson continue working to offer new features, webOS might have a future after all.