The MK802 may not be a super computer. But for under $100, the PC-on-a-stick make a surprisingly decent little computer. It ships with Google Android 4.0, but we’ve already seen that it can run Ubuntu, Fedora, and other Linux-based software.

Now Andy Kirby at Rikomagic UK has compiled some of the best Linux tweaks into a new disk image for the MK802. The result is software that transforms the MK802 into a pretty useful mini PC. 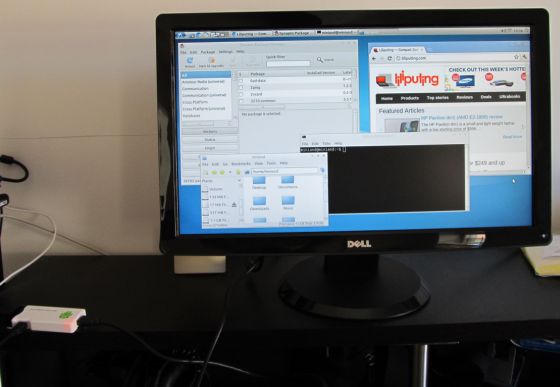 With an Allwinner A10 processor and just 512MB to 1GB of RAM, the computer isn’t exactly a speed demon. It struggles to handle YouTube video playback, for instance.

But it is fast enough for basic web browsing, document editing, and other simple tasks. It also boots reasonably quickly and feels a lot like using a computer that’s maybe 5 or 6 years old and which probably cost a lot more than an MK802 when it was new.

Kirby’s software is based on Lubuntu 12.04, a version of Ubuntu using the light-weight LXDE desktop environment. It includes fixes for WiFi that had been affecting some users, and allows the Chromium web browser to access the internet without any tweaks.

The software includes working audio, supports the full 1GB of RAM on versions of the MK802 that have that much memory, and allows you to access the 4GB of storage built-into the MK802, even though Lubuntu actually runs from a removable microSD card.

Unfortunately there’s still no hardware video acceleration for the Mali 400 graphics in Linux, which is part of the reason YouTube video playback is choppy.

Once you’ve downloaded the disk image from the Rikomagic UK forums, you can follow our instructions for loading it on a microSD card. Just scroll down to the section about installing Ubuntu 10.04, but use the new disk image instead.

Since Kirby’s software was prepared for the 1GB version of the MK802, the video output might look garbled on your TV or monitor. You can fix that by downloading suzuke’s uboot switcher from the minand forums and following the instructions for changing the uboot image before preparing your microSD card.

Note that wherever you see “image” or “uboot” in the instructions, you should actually type in the full name of the files you’re using. So in this case, once you have all the files in the correct folder, this is what you’d type:

Kirby’s version of Lubuntu uses a set display resolution of 720p rather than 1080p, because he thinks the computer is faster at that resolution. But if you’d like to switch to 1080p output, that’s pretty easy to do.

Interestingly, this is the first 720p version of Linux that I’ve tried on the MK802 that displays properly on my Dell monitor. I’ve had overscan issues with other operating systems, which means that my monitor didn’t display the edges of the operating system properly. Kirby’s software solves this problem somehow.

The MK802 is available from a number of vendors for around $80 or less. In4Dealz is also offering the little computer for $60 for the next week.